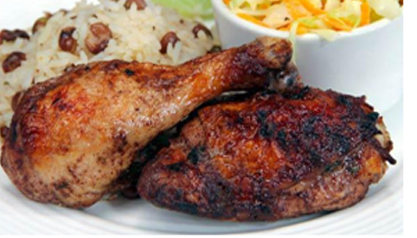 Directions
1. In a bowl, combine oil, vinegar, lime juice, allspice, salt, pepper, ginger, sugar, cinnamon and thyme. Chop (do not blend) the green onions, garlic and scotch bonnet pepper as finely as possible; add to the oil mixture and stir well.
Most cooks marinate their meat for as long as possible, at least 12 hours but sometimes up to
24. As a result, the chicken is imbued with a ton of flavor.
2. Add the chicken to the spice mixture and, wearing gloves, massage the spice mixture into the chicken with your hands. Marinate, covered and refrigerated, for at least 5 hours or overnight.
3. Preheat the oven to 350 degrees F. Line a baking sheet with parchment paper.
4. Spread marinated chicken on the baking sheet. Cover with foil and bake for 30 minutes or until the chicken is just cooked through. Remove the foil and broil the chicken until browned, turning once for even brown]=[ping. Don’t overcook. Discard the thyme sprigs before serving.
5. This dish can also be cooked on a barbecue. Grill for 10-15 minutes or until the chicken is no longer pink at the bone, basting with the remaining marinade. 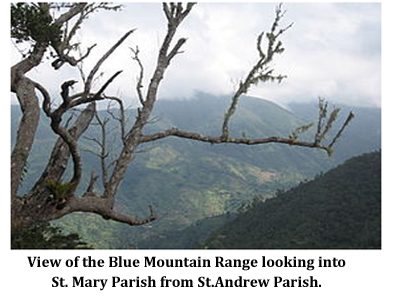 There’s a reason jerk is so dear to Jamaicans’ hearts, and that’s its long history on the island. The method of cooking is said to have originated under the colonial rule, first of the Spanish and then of the British, in the 1600s. Groups of African slaves that had been brought to Jamaica to work its sugar plantations escaped to the mountainous interior of the island, where the native Indian population also sought refuge from the colonizers.

These escaped slaves, today referred to as Maroons, are said to have hunted the wild boar common to the region, then preserved it for days in a spice-heavy marinade. When it came time to cook the meat, the Maroons dug holes in the ground, filled them with charcoal, and buried the meat in the holes, which they then covered so as not to produce smoke and attract the attention of those that would bring them back into slavery.

Whatever the recipe used, Jamaicans have a fierce passion for this native dish that’s as treasured for its historical significance as it is for its sheer tastiness.